Seven years ago today at 26 year old guy departed a plane into a muggy Chep Lap Kok Terminal. He wove his way through the vast concourse towards immigration. The queue seemed to take forever, but eventually he was at the counter. The officer looked him up and down, tired from a thirteen hour flight, and let’s be honest, a lot of champagne, he forced a smile and bid the lady good morning. His visa was stamped and he moved through into the luggage reclaim hall. He was officially a resident of Hong Kong.

With every intention of staying in Hong Kong for two years and doing the standard “tour of duty” this young man, who for a period before leaving hadn’t even looked at Hong Kong on a map and at that point did think it may be in the Southern Hemisphere, began his Asia experience.

Fast forward seven years to the day and where is he now?

Well, he obviously didn’t leave Hong Kong. After two weeks the city clicked and he never wanted to leave. All those experiences back then that were an affront, the smells, the language, the density, the hills became part of why he called Hong Kong home. There are still frustrations with the city, but it is vastly more good than bad. It is still to this day an experience in which he learns every day.

He’s moved jobs a couple of times from the ivory towers of banking to a tech startup. From protected and stable to raw and challenging.

He’s travelled all around the region from Mainland China to Japan, Thailand to Vietnam, Malaysia to Australia and islands and places in between and he still wants to travel more. He wants to write about it, and that was meant to be this blog, but seven years have gone quite quickly and that writing is something that has definitely fallen by the wayside. Something that will change in the next seven.

He’s taken up hiking and wakeboarding. Kiteboarding and scuba diving. He’s actually going to the gym regularly and not just been paying for the membership, though granted that’s only been the last year.

He’s performed in a number of shows, sang in a choir, been in a band, even dressed as an elf and Mormon Missionary. Let’s not forget being fully clad in a dry suit wearing googles with a Berocca tablet attached to his forehead so a bunch of kids could spray water pistols at him.

He’s had his heart broken. More than he’d care to talk about, but he’s grown better and stronger from it and not become cynical about love.

The one grey hair is now many, though he’s playing down that age thing.

He’s made great and strong friendships in a city that is as transient as they get. But those people who are here; those who remain; who get this hodgepodge of styles and cultures; that intersection of East and West; those who get that insanity and run with it; those who see the beauty in the old and the new; they are friendships he knows will last. It takes a special kind of person to get this city, but when you do there will always be a place for it in your heart.

It’s funny reading back the (very few) posts I made when I first moved here. All the excitement and intrigue of this new place. Even to this day that hasn’t gone away, the only difference now is I can really call this place home. 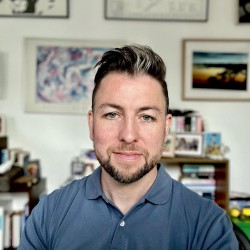